Gerry Anderson Encyclopedia
Register
Don't have an account?
Sign In
Advertisement
in: Captain Scarlet and the Mysterons, Captain Scarlet Vehicles, Vehicles and Vessels,
and 34 more

The Angel Interceptor is a single seater supersonic fighter jet employed by the SPECTRUM organisation as a fighter compliment aboard it's floating air carrier Cloudbase and as a general air defence and strike force. The design is an offshoot of the World Army Air Force Viper Jet constructed by International Engineering. All Spectrum officers have training in flying these craft, but their primary pilots are the Angels. Three are always stationed aboard Cloudbase's top deck ready for immediate launch with numerous others held in reserve in the decks below. The construction price for each individual interceptor is officially given as £1.25 million.

Due to the highly critical nature of the technology involved with the Angel Interceptors, the construction process has been carefully laid out so that no one factory holds a complete set of technical drawings for the craft. Only the Fairfield Engine company has ever been listed as a part of this chain in any media. Presumably the machining and manufacturing of the body is handled by one company alone. Another separate company assembles the electronic components that go into the aircraft. A third company assembles all the completed parts as one vehicle. The Fairfield Engine Company manufactures the engine and installs it itself. The last company tests the vehicles' airworthiness and once they have been cleared, gives them their final coating of paint before transportation to Cloudbase. 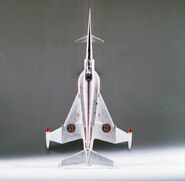 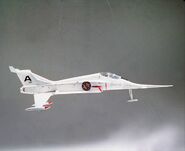 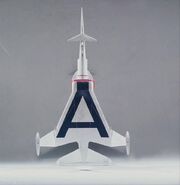