"We Will destroy Cloudbase"

Attack on Cloudbase is the 31st produced, and broadcast, episode of the British television series Captain Scarlet and the Mysterons.

Symphony Angel is shot down and crashes into the desert, where she soon succumbs to the relentless heat. Elsewhere, meanwhile, the Mysteron fleet has appeared in Earth's skies - intent upon exacting the full measure of malevolence against their despised foes: Spectrum itself, and its floating headquarters...

Enormous, ominous flying saucers surround Cloudbase, and open fire: Destiny Angel, Harmony Angel, Melody Angel and Rhapsody Angel take to their Interceptors to engage the invaders, but are swiftly shot down and perish. As the attacks continue, mercilessly decimating the ranks of Spectrum's personnel, Captain Scarlet attempts to mount a counter-offensive in the only surviving Angel aircraft; but it seems that he is no longer indestructible...and he too is killed...

Have the Mysterons finally won?

There was no guest cast in this episode.

Colonel White This is Colonel White to Spectrum Headquarters London. Cloudbase damaged and out of control. We will crash (in approximately) one minute. I'm attempt(ing/intending?) to go with my command. Out. 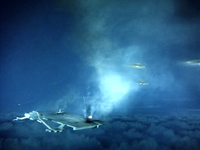 Cloudbase
(Under attack)
Community content is available under CC-BY-SA unless otherwise noted.
Advertisement