"Peace is what I want to see. A secure world. I can't do much about it if I'm dead."
— Conrad Turner, after his British Airforce Crash.

Captain Black (real name Conrad Turner) is a character from the television series Captain Scarlet and the Mysterons.

He was a senior Spectrum officer, before an unfortunate event turned him into the Mysterons' Earth Agent. He was then the mastermind behind many, if not all, of the Mysterons attacks on Earth.

Conrad Turner led a spectacular life in and out of the spotlight, starting out in the British Air Force. A year later, Britain fell into civil war, and an accident saw him burnt beyond recognition. Surgeons worked in excess of sixteen hours to save his life. Afterwards, Turner seemed to disappear from the face of the planet, until he resurfaced four years later as the pilot of Fireball XL3.

This new promotion put him once more in the public eye, and the newly formed Spectrum had their eyes on him. He was one of the first men chosen for the organisation's repertoire of agents, and was responsible for the construction of Cloudbase. Once the giant station was finished, he piloted the carrier from its orbital position into stationary orbit, 40,000 feet in the air. He then became Spectrum's Captain Black.

Captain Black was responsible for teaching the other Spectrum agents self-defence and also lectured Angel pilot trainees in combat flying techniques. He was considered to be Spectrum's premier agent, and was highly respected by his colleagues.

In 2068 Captain Black was sent to Mars as commander of the Zero-X, to track down unusual signals monitored by Spectrum. He was accompanied by two Zero-X crew members, Dean and Conway. The mission had been uneventful and largely unsuccessful, until a last minute chance discovery changed the entire history of Earth - the discovery of the Mysterons.

The Mysterons were peaceful alien beings and were prepared to welcome the space travellers from Earth. Harmlessly training their surveillance devices on the MEV, the Earth men panicked, believing that the devices were weapons. Without hesitating, Black gave the order to open fire, and the whole Mysteron city was obliterated. Black then decided to survey the wreckage with Dean, collect some samples and return to Earth. Just as they were about to collect their spacesuits, a hidden device appeared from the ruins and sent a beam that reconstructed the whole city. The Mysterons then declared a "war of nerves" against Earth for the crew's "act of aggression", and took control of Captain Black as their Earth Agent as a punishment, making him instrumental in helping to avenge them.

Inside the Martian Exploration Vehicle, with Dean and Conway 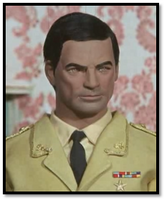 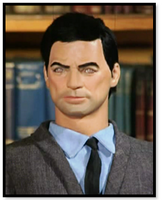