Captain Ochre (real name Richard Fraser) is a character from the Supermarionation television series Captain Scarlet and the Mysterons.

Captain Ochre was born in Detroit and was turned down by the WAAF for his lack of qualifications, Ochre joined the World Police Corps and learned to fly in his spare time. Ochre drives the Spectrum VIP transporter. 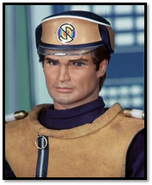