"It would seem that this Captain Scarlet is now indestructible. This presents us with a clear and exciting expectation that he will become our greatest asset in the fight against the Mysterons."
— Colonel White debriefing his fellow members about how valuable Captain Scarlet will be

Captain Scarlet (real name Paul Metcalfe) is the main hero of the Supermarionation television series Captain Scarlet and the Mysterons, as well as its CGI remake.

He was a senior officer of Spectrum and after his death and reconstruction by the Mysterons, he became the organisation's indestructible number one agent in the fight against them.

He was voiced by Francis Matthews.

Paul Metcalfe was born in Winchester, Hampshire, England on December 17, 2036 to a family with a long military history, he graduated from Winchester University in 2057, at the age of 21, and then went to West Point Military University; he later transferred to the World Army/Air Force, where within 2 years, he became the youngest colonel the WAAF had known to date.

Years later in 2067, he was approached by Spectrum and became one of the first of their senior officers Captain Scarlet. During his time in the organisation, he became close friends with fellow officer Captain Blue and was very popular with rest of his colleagues.

Sometime after that, the Mysterons, alien beings from the planet Mars who had the power of Retrometabolism had threatened to destroy all life on Earth because of an attack on their complex by other fellow Spectrum officer Captain Black and his crew on a Zero X mission to Mars who mistook their scanning device for a weapon. Their first threat was to assassinate the World President.

Scarlet was sent to New York with another fellow officer Captain Brown to rendezvous with the President and escort him to a secure Maximum Security Building. But along the way, the Mysterons used their powers to sabotage one of the tyres of their Spectrum Saloon Car. The car swerved off the road and dropped to the bottom of a gully, exploding into flames, killing them both.

From the dead corpses of the two men, the Mysterons created exact likenesses of them with the goal of carrying out their threat. When the attempt by Brown in New York failed, Scarlet hijacked the President on the route to London, whilst being chased by Spectrum and they trapped him by leading him to the Car-Vu skypark where a massive fight ensued between himself and Blue. The Mysteron attempt to take control of Spectrum Helicopter A42 to pick up Scarlet and the President and attack Blue failed after the angels attacked it and caused it to crash into the skypark, which destroyed the support structure.

Blue asked Scarlet to give himself up, but the Mysteron Agent just fired shots at him, leaving him with no other choice but to kill his friend. The agents fired their guns back and forth until one of Blue's bullets caught Scarlet in the chest, making him lose his balance on the gantry that he and the President were standing on and fall 800 feet to the ground below, whilst the President was carried away to safety by Blue and the whole skypark finally collapsed.

Spectrum recovered Scarlet's Mysteron body and took it back to Cloudbase. There they were amazed that his fatal injuries were healing without a trace and he was no longer under Mysteron control with the personality and memories of his former self returned. He had retained the ability of retrometabolism making him indestructible.

Since that day, Scarlet has become Spectrum's greatest asset in the fight against the Mysterons and his friendship and loyalty to the organisation is as strong as ever.

Also, at least for the first few episodes, Captain Scarlet would have a "sixth sense" which made him nauseous in the presence of another Mysteron agent or any other reconstruction nearby; this ability mysteriously disappeared soon after. In spite of his Mysteron powers, he is still capable of being killed with high voltage electricity which is the main weakness of any Mysteron reconstruction. 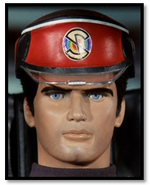 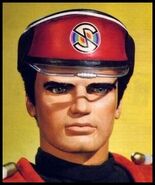 Leading the fight, one man fate has made indestructible. His name: Captain Scarlet. 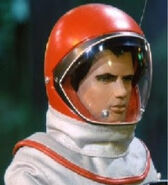 This artwork by Ron Embleton that always appeared in the end credits, showed Captain Scarlet in various life-threatening situations that showed his indestructibility: