"Although you have discovered our complex on the moon, it will never reveal its secrets"

Crater 101 is the 21st produced, and the 18th broadcast, episode of the British television series Captain Scarlet and the Mysterons.

Return to the Moon: Captain Scarlet, Captain Blue and Lieutenant Green volunteer for a dangerous mission - to gain access to the Mysteron complex they previously discovered at Crater 101 (in the episode Lunarville 7), and remove its power source before the area is destroyed by a low-yield atomic bomb.

Unknown to the Spectrum trio, however, the driver delivering the warhead has been killed and retro-metabolised into a Mysteron agent - and he's set the bomb to detonate the complex while the agents are still inside it! 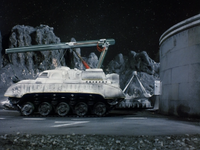 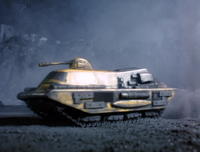 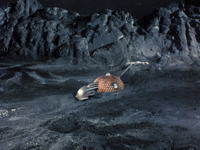 Mysteron Moon Base
Community content is available under CC-BY-SA unless otherwise noted.
Advertisement