Doctor 'Tiger' Ninestein is the commander in chief of the Terrahawks and one of the main characters of the series.

Ninestein is an artificial human, having been grown from the genetic material of Austria born scientist Dr. Gerhard Stein. It is unknown if he is an exact duplicate or if he is a unique entity. His first name is unknown. He has 8 other exact duplicates known as clones. The 'nine' in his name refers to himself being the 9th of these clones. Whether these share Ninestein's name or have individual names is unknown. These clones have been sent to various different parts of the world to learn and mature in their own ways. Ninestein in particular went down a military career path and eventually became the founder and leader of the Earth Defence Squadron known as Terrahawks.

Ninestein is a tough and stern leader, always demanding the very best of those under his command sometimes to the point of absurdity. He takes his job as leader of Terrahawks very seriously, but he has a bit of a cold blooded streak as he tends to assume the worst of every alien encounter, preferring to destroy at any given chance. He has a particular disliking of the Zeroids and their capacity for independent thought, especially Zero given his tendency to disobey orders and act without authorization from Ninestein. Despite his cold exterior, Ninestein does care a great deal about his teammates and on more than one occasion has spoken about the strength of humanity in the face of Zelda and her monsters.

The Invaders from Mars

Ninestein was the first human being to see Zelda first hand when he was abducted by her spacecraft. He quickly deduced her artificial nature and her looks being based on the eldest of their creators. He also deduced that Zelda's power over matter had been drained by the fighting so she didn't have the strength to maintain her ship's forcefield. With this knowledge, he ordered Lieutenant Hiro to open fire and destroy the ship with him on it. Because Zelda's power was also the method by which he had been taken however, when the ship was destroyed he was returned to Earth without harm. Both Ninestein and Zelda each recognize the intellectual prowess of the other. Throughout the series, these two have tried to outwit each other through many different schemes and plans. Zelda was successful in fooling Ninestein with a bomb disguised as a lump of gold, killing him and forcing one of his clones to take his place. Ninestein in turn was successful in tricking Zelda by giving himself up to her in exchange for two hostages, only for the rest of the Terrahawks team to successfully break him out of her base in accordance with his plan. However, because of their near equal intellect, whenever one side makes headway in their conflict, something invariably goes awry or the other manages to thwart their plans. 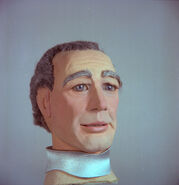 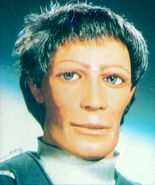