"We intend to immobilise the whole of Spectrum"

Fire at Rig 15 is the 19th produced, and the 21st broadcast, episode of the British television series Captain Scarlet and the Mysterons.

A flaming 1000 feet at a deliberately impaired oil-drilling rig, Rig 15, attracts the attention of Spectrum when the Mysterons explain their new threat to "immobilise" the international security organisation - which would render all their aerial sea and land vehicles useless. With the ultra-sonic oil wells and Spectrum's main oil refinery at Bensheba not so far from Rig 15 - and possible targets - explosive specialist Jason Smith is hired to extinguish the fire with his vast range of high-explosive charges. Approaching the blazing rubble, Smith falls down in front of his tractor...and is reconstructed by the Mysterons...

The fire's extinguished, but the real Smith is buried in the rubble by his duplicate. The next day, the Mysteronized Smith departs from the site early, leaving his original body near the downed rig - alerting Captain Scarlet that the Mysteron is on his way to the Bensheba oil refinery, to annihilate it! 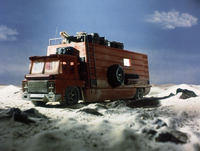 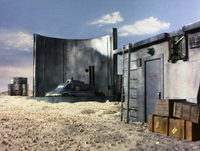