Invaders from the Deep

Invaders from the Deep is a compilation movie containing four Stingray episodes, Hostages Of The Deep, Emergency Marineville, The Big Gun and Deep Heat.

At Titanica, Titan is desperate to destroy Troy Tempest and Stingray. He confronts Teufel with his problem. Titan then tells all his subjects to destroy Marineville.

On the Island of Low, lives the retired Admiral Henry and his wife Milly. Then a Marine agent called Gadeth takes them hostage. He tells them that he intends to destroy Troy Tempest and capture Stingray.

Back at Marineille, Commander Shore is telling Troy, Phones and Marine that Admiral Henry has called requesting Stingray’s help. Also the Admiral used the word vigour in his message, which is the Marineville code for “it’s a trap”.

Gadeth, still thinking that the crew of Stingray no nothing of what’s going on, he gets Henry and Milly to enter his vessel. Stingray arrives at the island; Troy and Phones go ashore leaving Marina on board alone.

They reach the shore and head towards the house, but Troy suspects something. So he sends in a toy fish on wheels by remote control. Once it enters, the house explodes, they see Gadeth’s ship speed away from the island. Troy and Phones heads back to Stingray, once they are on board they chase after Gadeth.

Gadeth takes his ship into the tunnel, unfortunately it’s too small for stingray. Troy and Phones begins to bicker on whether to take the Aqua Sprite or the underwater suits. During this, Marina secretly goes into the tunnel.

Troy and Phones go after her, wearing underwater suits. When she reaches the end of the tunnel, she gets captured by Gadeth and tied up. He asks her what is Troy Tempest’s plan, but Marina would not answer.

Soon Troy and Phones reach the end of the tunnel and manage to capture Gadeth and free Marina, Henry and Milly.

On a deserted Island, a missile flies out of a crater of a volcano, and heads straight for Marineville. Luckily they manage to activate Battle Stations and fire a WASP interceptor that destroys the missile just in time.

Once Commander Shore gets an approximate position of where the missile came from he orders Stingray to investigate. After they’ve checked Area 20, they go onto Area 21 where they discover the small island. Suddenly another missile is launched from inside the crater of the volcano again.

At Marineville, they fire another WASP interceptor that destroys the missile. Commander Shore tells Troy to investigate the island. They begin to find some way of getting into the island by going underwater. The find a cave mouth and enter until finally they surface to find they selves inside the island.

Troy and Phones get on the Monochoppers and head for a tunnel. Once they land they are confronted by a paralyzing ray that knocks them unconscious. They wake up to find themselves in a control room with two subterrians called Nucella and Chidora who have taken them prisoner. Nucella asks Troy and Phones to tell him what frequency Marineville interceptor missiles work on, with this knowledge Nucella could jam the interceptors allowing his missile to get through and destroy Marineville.

However Troy and Phones refuse to tell them, so Chidora shows them that they have captured Marina. She has been strapped to a chair. If Troy and Phones don’t give the necessary information Marina will receive a continuous shock of electricity. Once the voltage has gone up to a thousand, she dies. Despite this, Troy still refuses so the electricity is turned on. Slowly as the voltage increases Marina feels more and more pain. Until finally before it reaches a thousand volts Troy gives in and tells them.

So with the information, Troy, Phone and Marina are locked up in a cell while Nucella and Chidora go to their missile and change the frequency. At the cell Troy has noticed that Chidora left the cell key on a table just out of arms reach. So using a button from Phones uniform and fabric from a pillow Troy tries to reel the key to him.

Quickly the Rocket Disposal squad gets to work on the missile. They discover that the missile had already been disarmed and a note was found in it. Commander Shore reads the message, he discovers where Troy, Phones and Marina are being held prisoner. So he orders the WASP Spearhead Jets to go to the island.

Once they arrive they give Nucella and Chidora a chance to hand over Troy, Phones and Marina before they begin to destroy the island. However, Nucella is sure that they’re bluffing so he refuses. Because of this the Spearhead pilot’s begin to bombard the island with missiles. Realising that they are not bluffing Nucella and Chidora surrender and set Troy, Phones and Marina free.

Commander Sam Shore is contacted by Marineville HQ and told about three islands that have been destroyed in the same area. Shore then orders Stingray to have a look around the area.

Under the sea a small vessel with a huge gun mounted on it, heads for a tiny island. Inside one marine man called Meritamis fires at the small island, destroying it completely.

He starts to head back to his home called Solister. He docks and is given a medal for his work, by his leader. He is then told to start destroying the west cost of America!

The crew of Stingray find the Solister vessel aiming at a sea dock. Stingray manages to fire at the vessel before it destroys the dock. Meritamis survives by ejecting into an escape pod and heads back to Solister.

He tells his leader about the entire incident. Soon they learn of Marineville and Stingray and decide to destroy them all. So Maritamis heads out in the second vessel towards Marineville.

Marineville tracking station alerts Commander Shore of the Solister vessel, he orders battle station. Maritamis fires one missile, but Marineville’s manages to be under ground before the missile hits.

Stingray starts to chase after the vessel. Maritamis decides to lure Stingray back to his base and then he will destroy them.

Soon they arrive at the entrance and they go straight in. Troy, Phones and Marina discover that the Solister base is several hundred feet under the sea. However Stingray manages to stand the pressure, but Troy and Phones pass out due to pressure.

Meritamis begins a countdown to fire at Stingray, but before he does, Marina fires a sting missile from Stingray, killing Meritamis. Troy also tells Marina to destroy the whole of Solister.

Deep in the ocean an unmanned sea probe is being used by Marineville to create a survey of the sea. Soon the sea probe stumbles across an underwater extinct volcano, it slowly descends into the mouth of the volcano. Because of this the signal of sea probe begins to get fainter and fainter until it finally stops.

Commander Shore launches Stingray to investigate the disappearance of the sea probe. Stingray soon reaches the volcano but is suddenly pulled down into the crater by some force. They soon reach the bottom of the crater where Stingray lands on a smooth surface.

Suddenly a voice instructs Troy and Phones to make there way to a door, which is apparently an air lock. Before they try to escape, missiles are aimed at Stingray.

Troy and Phones swim out of Stingray with breathing apparatus on into the airlock. The voice instructs them to pull the lever on the wall. Suddenly the air lock begins to descend even further down into the volcano, until finally it reaches the bottom.

Troy and Phones discover a room with elaborate furniture, food, machines, and inscribings on the wall. They soon meet two Subterraneans called Turata and Fragil. They explain they are part of a civilisation called Centrallius, who live in a city called Voldana in the volcano. They tell that the entire city was submerged in lava and everyone was killed. Luckily Turata and Fragil were locked in this room when the volcanic activity started, saving them and soon the activity subsided, until now. They say that the volcano has become active again and that lava will soon pour into this room if they don’t escape.

That is why they sucked in Sea Probe in order to escape, but they discovered it was full of instruments and were unable to escape in it. Then they found Stingray, they say they need a craft to escape in because they cannot breath underwater and have no breathing apparatus.

Troy and Phones feel happy to take them back to Marineville to help them escape, but there is only one problem. There is only one pair of breathing apparatus, so at gun point Turata and Fragil take the apparatus and step into the airlock. Turata says one final thing to Troy and Phones, “We would not want to prolong your suffering, we are humane people.” Turata then shoots the protective door allowing the lava to seep into the room.

Down below, Troy and Phone notice the airlock returning. Once it arrives they knock Turata and Fragil out and enter the airlock. They speed back up to the top as the fire from the lava chases them. Once they reach the top they all enter Stingray and manage to escape the volcano before it erupts.

(In Order Of Importance) 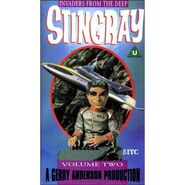