King For A Day

King For A Day is the 7th broadcast episode and 11th produced episode of British television series Joe 90.

Joe 90 impersonates the heir to a Middle Eastern country who has been kidnapped to prevent his enthronement: but Joe himself is then abducted.

The Sultan of Ardaji is killed in a car crash deliberately caused by the Regent, Ben Shazar, who has designs on the throne. The custom of the country is that the new Sultan must be crowned within twenty-four hours. The heir is at school in England, and Ben Shazar's men abduct him. The World Intelligence Network is informed, and Joe 90 is given the brain patterns of the young Prince's tutor so that he can take the Prince's place and be familiar with the country, its customs and its people. While the WIN organisation searches for the young Sultan, Joe flies to Ardaji, where he is put through every test by Ben Shazar who, when satisfied that this really is the Sultan, realises the only way for him to gain the throne is to arrange a second kidnapping. Joe is abducted after his food has been drugged. But by now the real Sultan has been found and is already on his way to Ardaji for the coronation. Ben Shazar is dumbfounded when he discovers that the coronation is to take place with the rightful heir, after all, but now his treachery is known. Can he escape and can Joe be rescued?

Shane Weston
(David Healy)
Add a photo to this gallery

Radio
(Keith Alexander)
Add a photo to this gallery

Palace Guards
Add a photo to this gallery

Crash lorry
Add a photo to this gallery

Shazar's villa
Add a photo to this gallery 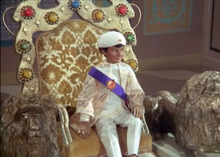 Penny's chairs
Add a photo to this gallery
Retrieved from "https://gerryanderson.fandom.com/wiki/King_For_A_Day?oldid=24274"
Community content is available under CC-BY-SA unless otherwise noted.