Lavender Castle is a TV series created by Gerry Anderson and Rodney Matthews, and was also Gerry's second venture into stop-motion animation.

The series follows the story of Captain Thrice and his crew, on a quest to find the peaceful city of Lavender Castle before the evil Dr. Agon and other intergalactic villains do.

Lavender Castle is a place of mystery and legend, fabled throughout the universe, a floating city of light, a place of peace, harmony and all the things that have ever been dreamt of. It is the centre of the universe and the greatest source of power - should it be destroyed, the universe would be plunged into darkness forever. Evil scientist Dr Agon plans to do just that. A lonely megalomaniac with technology-assisted powers of transmutation, he yearns for darkness and has pledged to destroy Lavender Castle from his fortress spaceship, the Dark Station, the most destructive power in the universe, crewed by unseen slaves working deep in the bowels.

In order to prevent this, Captain Thrice has set out on a quest to find the elusive Lavender Castle before Dr Agon. A previous encounter with Lavender Castle gave life to Thrice's walking stick and left the Captain with a special knowledge of its power and abilities. Travelling in his cottage spaceship, the Paradox, Thrice assembles a crew of misfits to join him in his quest, combatting evil wherever they find it as they travel the universe searching for clues that will lead them to Lavender Castle. But Lavender Castle works in mysterious ways and lends its power to the Paradox crew to protect them when they most need help. 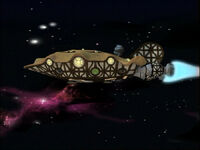 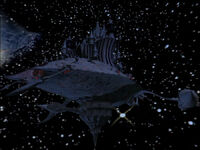 The Dark Station
Add a photo to this gallery 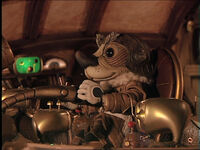 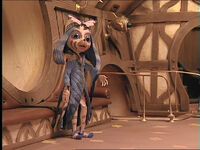 Floran
Add a photo to this gallery
Retrieved from "https://gerryanderson.fandom.com/wiki/Lavender_Castle?oldid=29835"
Community content is available under CC-BY-SA unless otherwise noted.