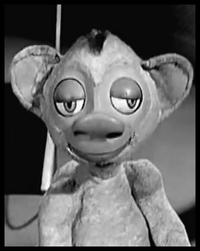 Lazoons are monkeylike creatures from the planet Colevio noted for their empathetic abilities and capacity to mimic almost any creature's speech, including humans. An example of a lazoon is Zoonie, Dr. Venus's pet on Earth.

Not much is known about Lazoonkind, other than they are semi-telepathic and quite lazy.
They are about 1 metre (approximately 3½ ft) in height and about 27 kg (approx. 60 lbs) in weight, having large eyes and ears, as well as a large appetite.

The lazoon's home planet, Colevio, became quite warm due to the changing climate, and the native lazoons were becoming so lazy that they hardly bothered to breed.
The humanoids on a neighbouring planet to Colevio admired its natural, untouched beauty and decided to migrate there, but due to an unusual allergy these humanoids had to lazoons, they'd fall into a trance-like state in close contact with lazoonkind.
Due to this, they sent robotic fleets to collect all lazoons on Colevio and transport them to cooler, more suitable climates, such as the ice planet Zanadu, and the Himalayan mountains of Earth (possibly fueling legends of the Abominable Snowman there).
After being certain than all lazoons were removed from the planet, the humanoids migrated to the planet and began building cities, however, one lazoon remained, and went to the cities in curiosity, due to the allergy, the humanoids all went into a deep sleep, possibly never to awaken again.
Luckily, Dr. Venus of the World Space Patrol helped the humanoids by removing the last lazoon from the planet, hence saving them from an enforced sleep.
Venus liked the lazoon quite a bit, and gave it the name of Zoonie.
Not much is known about the fate of the other lazoons, other than they had destroyed the Zanadu civilization, and had to be killed off. (src)

Retrieved from "https://gerryanderson.fandom.com/wiki/Lazoon?oldid=26162"
Community content is available under CC-BY-SA unless otherwise noted.