Captain Mary Falconer is second in command of the Terrahawks and also the pilot of the Battlehawk, a freight-carrying aircraft and operator of the Groundhawk, a ground operations vehicle.

Mary is a brilliant astro-physicist, having been educated in Cheltenham and Cambridge ontop of graduating from Harvard University. She was born to a family of 4, including her mother, father and her two brothers who unfortunately perished in a re-entry collision in 2012. In 2006 she undertook civilian pilot training, becoming a noted stunt pilot and free-fall parachutist throughout her time. Her father, a leading scientist, died of natural causes in 2013. In 2015 she joined the UNIPC Research Council where she began taking on military experience on space missions until 2018 when she was assigned to Terrahawks Strategic Planning Assignment.

Unlike Doctor Ninestein who treats the Zeroids rather cruelly, Mary is very protective of them and has a deep felt respect and often berates him for mistreating them.

With her charming and persuasive nature, Mary also has a powerful intellect combined with a daredevil streak.

When a mission needs to be complete, she is calm and collective, but she will urge everyone she works with to do their very best.

Mary is voiced by Denise Bryer who also voiced Zelda in the television series and audio dramas. 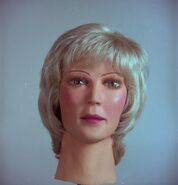 Mark 1 Mary puppet seen in Expect the Unexpected parts 1+2
Add a photo to this gallery
Retrieved from "https://gerryanderson.fandom.com/wiki/Mary_Falconer?oldid=28706"
Community content is available under CC-BY-SA unless otherwise noted.