After he, Jimmy and Jimmy's big brother Bill are rescued by Supercar - following their private plane's emergency ditching in the sea - Mitch immediately proceeds to make himself right-to-home in the secret Nevada laboratory...up to, and including, Supercar's launch bay (!), prompting amused test pilot Mike Mercury to observe, "I think we've found a co-pilot!"

He's definitely chief mischief-maker of the place - apt to pop up most anywhere, from Dr. Beaker's laboratory to Professor Popkiss' kitchen and even Mike's bedroom, gamely stirring up (usually) good-natured trouble...and with a gift for being in the wrong place at the right time, for his human friends!

Mitch was voiced (eek-eek and all!) by David Graham. 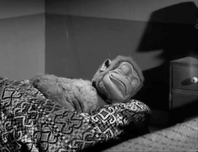 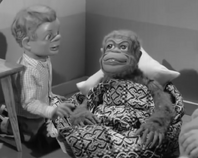