Gerry Anderson Encyclopedia
Register
Don't have an account?
Sign In
Advertisement
in: Article Stubs, Captain Scarlet and the Mysterons, Episodes,
and 3 more

"We are about to attack the house of Verdain"

Model Spy is the 18th produced, and the 14th broadcast, episode of the British television series Captain Scarlet and the Mysterons.

Two models, eager to make their names publicised and internationally known, are killed in a dramatic staged railroad crash, while en route to Paris - and are rebuilt by the Mysterons in an attempt to assassinate Andre Verdain, owner of the "House of Verdain," a top modelling & fashion design company...and, secretly, the controller of the European Area Intelligence Service...

Captain Scarlet and Captain Blue, along with Symphony Angel and Destiny Angel, go undercover - as French newspaper photographers and stunning, attractive models - in order to guard Verdain from any Mysteron attacks. However, they're absolutely oblivious to the presence of the two female model doppelgangers... 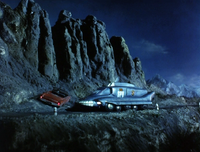