Navigator Conway is a character from the Captain Scarlet and the Mysterons episode The Mysterons.

He was part of Spectrum's Zero-X mission to Mars, and along with Captain Black and Lieutenant Dean, accidentally discovered the Mysterons.

In the Martian Exploration Vehicle, with Dean and Captain Black

As the DT Co-Pilot
(note the different eyes) 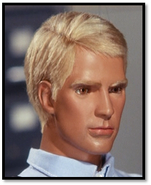 Culver Guard 1
(eyes are back to brown) 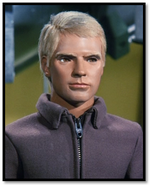