President Conrad Olafson was a character in Captain Scarlet and the Mysterons episode Codename Europa.

He was one of the three presidents of the Triumvirate of Europe along with John L. Henderson and Joseph Mecinni.

Each president was being protected by Spectrum in a maximum security base after a threat of assassination by the Mysterons.

After arriving near the base, Professor Gabriel Carney (an electronics genius who had been killed and reconstructed to carry out the Mysteron threat) set up a high speaker system realistic sound effects to fool Spectrum into thinking they were being attacked. Whilst the organisation was distracted, Carney cut through the electric fence and placed a bomb in a vent of a room where he thought Olafson was hiding. However it was only a dummy inlet that went as far as ground level and Olafson who was 40 feet below the ground was safe.

Believing that they had succeeded, the Mysterons left Olafson alone and sought out the other two presidents.

Olafson was voiced by Gary Files. 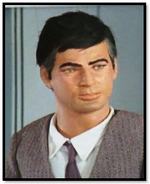