"You will never discover the secret of the Mysterons"

Shadow of Fear was the 12th produced, and the 19th broadcast, episode of the British television series Captain Scarlet and the Mysterons.

Spectrum is trying to deceive the Mysterons and take pictures of their home planet, Mars. But are the Mysterons too clever for them? Will they be found out and stopped?

At the K14 Observatory in the Greenland Mountains, three astronomers - Dr. Breck, Dr. Carter and Dr. Angelini - are carrying out an experiment. Captain Scarlet and Captain Blue are also on hand, as observers. The astronomers are counting down to begin the picture-transmission from a satellite that is approaching Mars...

All is not lost, however: it's in fact all part of a plan called “Operation Sword,” conceived by Spectrum. They want the Mysterons to believe they've destroyed the intrusive Earth satellite...so Spectrum can then send the real one without it being detected. At the moment, that satellite is hidden behind a large rock, which is going past Mars. Once it reaches Phobos - one of Mars’ two moons - it will land there and commence taking pictures of Mars itself...

With the first pictures expected to reach K14 the following day, everyone retires for the night - save for Captain Scarlet, who's on night watch, and the too-restless-to-sleep Dr. Breck. He's watching Mars through a telescope - when suddenly the Red Planet starts giving off a huge amount of light, which affects Dr. Breck, until he collapses on the floor - dead! Slowly, two green rings pass over him...and soon afterward, standing beside the scientist's body is his Mysteronized clone!

Once the others find Dr. Breck is missing - and with only a few minutes before the countdown to receive the pictures begins - Captains Scarlet and Blue take up the search, while Drs. Carter and Angelini begin the countdown...

Dr. Breck, meanwhile, is attaching a bomb to one of the gears in the observatory's Gear Rotation Room. Then he heads outside - to face a full-blown Spectrum search party, with Captains Scarlet and Blue getting air-support from Melody Angel and Captain Grey aboard a Spectrum Helicopter!

The chase is on, and Dr. Breck is discovered hiding on top of a cliff-face; he tells the Spectrum agents what he's done and that the bomb will explode the moment the receiver atop the Observatory turns. He and Scarlet exchange gunfire, and Breck is killed...

They try to rush back to the Observatory to warn Drs. Carter and Angelini, but they're too late: the receiver turns, the bomb detonates, the Observatory is destroyed and the two astronomers perish...

Despite the failure of not receiving the pictures, Colonel White states that "Operation Sword" shall continue as planned... 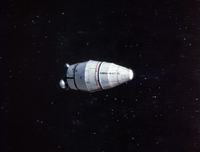 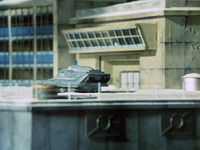 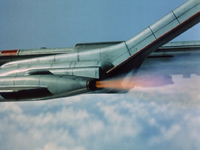