Space Police (1986) was a project created by Gerry Anderson and Christopher Burr. Only one episode was made, but was never aired on television. The idea for the series was eventually taken and transformed into Space Precinct almost a decade later.

Lieutenant Brogan warns the planet's President of the possible dangers from Victor Lann and his gang. The President, stubborn and ignorant of the consequences, decides to continue his planned trip to Ultraville by monotrain. However Breon, the President's assistant, has given the security code for the monotrain to V. Lann in exchange for his family's safety. V. Lann destroys the original front engine and has his own booby-trapped duplicate coupled to the carriages.

Slowmo relays a message from Monorail Central Control to Brogan, stating that someone deliberately threw the override switch, meaning that MCC has lost control of the President's monotrain. Suspicious of criminal activity, Brogan tries to warn the President, but a bomb destroys the engine's emergency brakes, sending the train speeding along the planet's rail system. Soon after, V. Lann delivers an ultimatum to Brogan: the release of his men or the President dies.

Further down the line, Officers Tom and Bats discover a bomb planted under the rail by V. Lann as a first attempt to wreck the monotrain. Watching from close by, V. Lann orders his subordinate E. Vile to delay them with a laser rifle. Tom returns fire and covers Bats as she continues the defusing procedure. Anxious, E. Vile flees with V. Lann, and Tom accidentally dislodges a boulder from the rockface whilst trying to stop them. Using his powers of telekinesis, Tom levitates and holds the giant rock in the air long enough for Bats to successfully defuse the bomb, as well for the monotrain to pass underneath, to which then the boulder crushes the track under its immense weight.

In retaliation, V. Lann destroys a rail bridge ahead of the monotrain, which is still accelerating swiftly towards the end of the line. In their latest rescue attempt, Brogan contacts the President and informs him to move with his staff to the last carriage, while Officer Dick takes a shot with his pistol at the coupling system, and succeeds in decoupling the last two carriages from the train. However, when he and Harry land their cruiser to pick up the President, they are forced to retreat when an unknown assailant fires at them from the carriage window.

Brogan discovers the train's steward is working with V. Lann and had forced the President and Breon back into the main carriage at gunpoint, killing one of the President's staff in the process. The Space Police decide to try one last rescue attempt. With the help of Brogan and Harry, Officers Cathy Costello and Dick manage to board the train, disable the engine and apply the brakes in the nick of time before the train is halted at the edge of the shattered bridge. However, Dick is pinned underneath some machinery at one end of the front engine, preventing Cathy from helping him.

Despite his protests, Cathy takes her chances and leans over quickly to aid Dick, but the combined weight at the front end of the train causes the engine to topple over the edge into the canyon below. Just when the situation seems hopeless, Tom, who had parked his cruiser at the bottom of the ravine, slows the fall of the train with his telekinesis causing it to land softly on the debris, thus saving his comrades.

While the President thanks the Space Police for saving his life, Dick flies his cruiser back to the decoupled carriages and confronts the assailant: an six-armed alien, who overwhelms Dick in a gunfight. Just as the alien is about to shoot him, Brogan appears and disarms the assailant with his Colt .45 revolver, who surrenders worriedly. Brogan admires his old but reliable firearm as the credits roll. 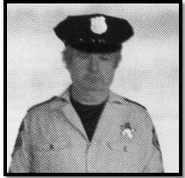 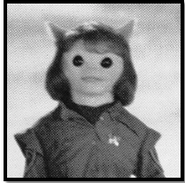 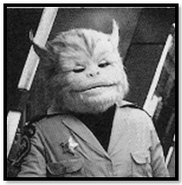