Gerry Anderson Encyclopedia
Register
Don't have an account?
Sign In
Advertisement
in: Real World, Supermarionation, Behind the Scenes

Supermarionation is a filming technique developed by Gerry Anderson and his peers, the name of which is a combination of the words "Super", "Marionette", and "Animation". Although Supermarionation were in the 1960 series, Four Feather Falls, the name was first applied to the show Supercar in 1961, and the technique was used in all of Anderson's series throughout the 1960s.

The Supermarionation credit in the movie Thunderbirds Are Go

The Supermarionation credit in the movie Thunderbird 6 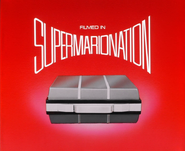 The Supermarionation process was based on the techniques used in Gerry Anderson's early puppet shows and continued to be refined right through to it's final form used in the shows Captain Scarlet and the Mysterons, Joe 90 and The Secret Service.

Notable stages in the development of Supermarionation:

As the 70s dawned Gerry Anderson, ever the innovator felt it was important to move on from techniques that he had been using in the 1960s. As a result he moved on to live action shows such as UFO and Space: 1999; many of the same techniques employed in Supermarionation were still used for exterior and vehicle shots.

In the 1980s Gerry Anderson developed a process known as Supermacromation. Like Supermarionation this was based around puppets, although this time they were hand puppets rather than a marionette style puppets. This new approach overcame the difficulties with creating a realistic walking motion and other problems that Gerry Anderson had found particularly frustrating.

In the 1980's, anime master Go Nagai along with Kimio Ikeda created X-Bomber (imported to the UK as Star Fleet), a series created using puppetry quite similar to Supermarionation -in a process dubbed Sūpāmariorama by the crew. The success of “Star Wars” and “Thunderbirds'” longstanding popularity inspired producer Kimio Ikeda of JIN Productions to try combining Lucas' space opera approach with the Andersons' marionette techniques to offer what he hoped would be a fresh alternative to the plethora of SF anime on Japanese TV.

The "Supercrappymation" process devised for the film Team America World Police was based heavily on Supermarionation; the similar name being used in homage to the original. Supercrappymation puppets merged modern animatronics technologies with the Supermarionation techniques to produce characters with an unprecedented level of expression in their faces. Although the Supercrappymation process is a more technologically advanced process the word 'crappy' included in the name alludes to the differences in many of its philosophies, for instance the control wires and limb joints were deliberately left visible, whereas Gerry Anderson would always go to great lengths to hide them.

The CGI show New Captain Scarlet was said to be filmed in Hypermarionation as a nod to the original Supermarionation.

In addition, the technique was used for one unbroadcast pilot episode: