"Terrahawks, stay on this channel! This is an emergency!"

Terrahawks was a TV series produced by Gerry Anderson and Christopher Burr from 1982-84.

The series was made up of 39 episodes which were originally broadcast in the UK in 3 separate 13 episode seasons. This was Gerry Anderson's first time producing a TV show from the ground up since 1958 with A.P. Films. The series was made at Bray Studios in Berkshire.

Terrahawks focused on the eponymous Earth Defence Squadron known as Terrahawks which was tasked with defending planet Earth from alien threats. The series is notable for it's less dire tone of stories than many of Gerry's post Thunderbirds shows such as Captain Scarlet or UFO. Tounge in Cheek humour was often the mainstay, with head writer Tony Barwick in particular writing most of the series under pseudonyms that were puns of the name Einstein such as 'L. Inkstein' or 'Tom Katstein'.

The series premiered on London Weekend Television but did also get broadcast on ITV Network and Granada Television. It was remarkably popular during its original run amongst children, the character of Zelda enduring the most in the minds of many due to her scary design. The series was picked up for US networking by Tribune Broadcasting in 1986, who enjoyed similar positive response and were interested in commissioning an additional 35 episodes.

Scripts for this planned 4th series included one written by Gerry Anderson titled '101 seed' and one by Tony Barwick called 'Attempted MOIDer', the former seeing the light of day as an episode of the first series of the Big Finish Terrahawks audio revival in 2014. Unfortunately, Tribune failed to produce the money needed and after two failed attempts by Gerry to get a Terrahawks spin-off into production, one focusing on Stew Dapples and another with just the Zeroids and Cubes, production on Terrahawks finally came to a close at the end of 1986.

Due to the series not being an ITC Entertainment product, the series was not rerun after the 80s and today remains a rather obscure series in the Gerry Anderson oeuvre.

In 2020, the NASA Mars base was attacked and destroyed by a fleet of alien ships commanded by a witch-like "Mantron" (conscious android) named Zelda from the planet Guk (technically, Proxima Centauri 2), who set up her base on the newly-vacant Mars planet and promptly launched her attacks against the Earth with her son Yung-Star and her sister Cy-Star at her side. Terrahawks - an elite fighting force, set up in response to a previous alien attack in 2017 - stands ready to oppose the terrible alien threat, operating out of Hawknest in South America. Their leader is Dr. 'Tiger' Ninestein, one of nine clones of Professor Gerhard Stein; the rest of the team consists of: Captain Mary Falconer, Tiger's second-in-command; Captain Kate Kestrel; Lieutenant Hiro; and Lieutenant Hawkeye.

There are 5 main vehicles in the organization: Spacehawk, a mobile space station and first line of defense; Hawkwing, a high-speed interceptor-craft; Battlehawk, an armed heavy-duty transport; Treehawk, a space shuttle similar in function to Thunderbird 3; and Terrahawk, a nimble reconnaissance craft stationed on Battlehawk.

In addition to Terrahawk, Battlehawk also carried: Battletank, a ground-assault vehicle driven by Megazoids; H.U.D.S.O.N., an upgraded 1990s Rolls Royce, which acted as a civilian transport for members of the team (and as Kate Kestrel's manager); Groundhawk, a rarely-used hostile-environment vehicle similar to Battletank; Seahawk (also rarely-used) the only Terrahawks craft capable of operating underwater.

Like Battlehawk, Spacehawk accommodated a handful of smaller vehicles: Spacetank; the aforementioned Treehawk; a Martian Exploration Vehicle (MEV), similar to that seen in Captain Scarlet & the Mysterons; and Hawklet, which was basically a smaller version of Treehawk (but better suited for aerospace combat).

The team also consists of a number of spherical robots known as Zeroids. These were often led by Sergeant Major Zero, although assisting Hiro in space was Space Sergeant 101. Despite being mechanical, many had their own personalities: 18, who spoke with a French accent, and whose name was often mispronounced as "Dicks Hewett"; 21, who spoke with a stutter; 55, who constantly rhymed when speaking (and who frequently helped Kate Kestrel write songs in her spare time).

Zelda's family often remained on Mars, preferring to send their cabal of Monsters in cryogenic store to attack Earth and the Terrahawks on their behalf. These included Sram who could produce a thunderous roar, MOID whose name was an acronym for Master Of Infinite Disguises, and Yuri the Space Bear. Zelda's answer to the Zeroids were the Cubes who formed the backbone of the android's military might, one of which was kept as a pet by Cy-Star and named 'Pluto'. In the show's third season, the Androids of Mars were joined by a fourth member in the form of Cy-Star's offspring It-Star.

An audio series of 24 episodes produced by Big Finish Productions was released some 30 years later, which consisted of three separate 8 episode long anthologies.

Without the lavish budgets of his earlier television series, it was apparent to Gerry Anderson from a very early stage of production that it would not be possible to record full orchestral scores for Terrahawks. However, the development of synthesised music had advanced considerably since the early days of the experimental ‘electromusic’ composed and recorded by Barry Gray for Supercar and Fireball XL5, and by 1983 it was possible to create electronic music that could at least approach the scale and majesty of a full orchestra, but at a fraction of the cost.

Richard Harvey was introduced to Anderson by a mutual friend, music producer Tony Prior, who has previously suggested Derek Wadsworth as the composer of the music for Space: 1999 Year Two. A graduate of the Royal College of Music with a background in ancient and classical music, Harvey had worked extensively with film composer Maurice Jarre in the late 1970s. This experience made him the ideal choice to compose the music for Terrahawks, combining his knowledge of the structure of classical orchestral music with the latest synthesised music reproduction techniques. Anderson and his business partner Christoper Burr had regular meetings with Harvey to discuss the style of music that they wanted for Terrahawks, particularly the main theme which was envisaged as a combination of the 'best bits' of the themes to Star Wars, E.T. and Dallas.

In 2002, Fanderson records released a soundtrack compiling 75 minutes worth of music, the album included 3 of Harvey’s Demo Themes for the show, 6 full episode scores and 3 surviving Kate Kestrel songs, “S.O.S”, “It’s So Easy” and the latter half of “Living in the 21st Century” which was used as the End Titles music in the U.S. syndication run. The remaining songs and first half of “Living in the 21st Century” are currently missing, presumed destroyed. 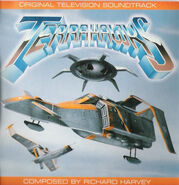 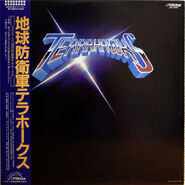