" At the appointed hour, as the clock is chiming, the wings of the world will be clipped'"

The Trap is the 13th produced, and the 7th broadcast, episode of the British television series Captain Scarlet and the Mysterons.

A World Air Force plane carrying Commodore Goddard and his right-hand man, Captain Holt - being escorted by Melody Angel - is struck by lightning and crashes. It is soon reconstructed by the Mysterons, who broadcast its current threat: that they aim to kill all ten of the world's top air-chiefs, who comprise the WAF's executive Supreme Command.

The Supreme Command - who want to discuss a plan to dissolve the "war of nerves" between Earth and the Mysterons - are convening an International Air Conference at the loneliest location in Europe: Glen Garry Castle, in Scotland.

This is, however, unknown to Colonel White, who's awaiting word from Captain Scarlet that the castle's security is up and approved. After Symphony Angel brings the delegates to the castle to start the conference, she and Scarlet are taken prisoner...

Now - with the air-chiefs lacking any advance-warning, and in perfect firing positions to be massacred by the Mysteronized Goddard and his personal aide - will Colonel White realise in time that something is wrong? And, can Captain Scarlet yet save the day? 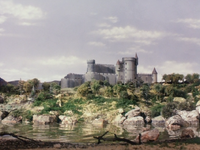