Fireball XL5 is one of an initial batch of thirty patrol ships built at Space City from 2050 to 2062. It is the best known craft currently serving with the World Space Patrol. Like its sister ships, the XL5 incorporates hyperdrive technology, whereby space and time can be effectively 'folded' to allow faster-than-light travel.

The nosecone section of Fireball is detachable as is used to land on planets while the main body continues to orbit the planet. 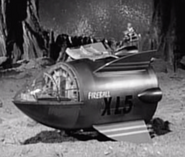 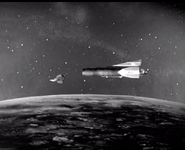 Add a photo to this gallery

Landing
Add a photo to this gallery
Retrieved from "https://gerryanderson.fandom.com/wiki/XL5?oldid=27581"
Community content is available under CC-BY-SA unless otherwise noted.